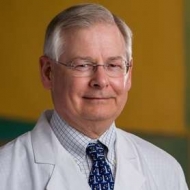 David Johnson, M.D., joined the UT Southwestern Medical Center faculty in July 2010 as the Donald W. Seldin Distinguished Chair in Internal Medicine and Chair of the Department of Internal Medicine.

He was named Chair Elect of the American Board of Internal Medicine (ABIM) Board of Directors in 2012 and serves as the Chair of the ABIM Subspecialty Board for Medical Oncology. Dr. Johnson also has served on the Food and Drug Administration’s Oncology Drug Advisory Committee, as chair of the Cancer Prevention and Research Institute of Texas’ (CPRIT) Translational and Clinical Review Committee, as chairman of the Thoracic Committee of the Eastern Cooperative Oncology Group, and on the Boards of Directors of the National Comprehensive Cancer Network, the International Association for the Study of Lung Cancer, and the LiveSTRONG Foundation.